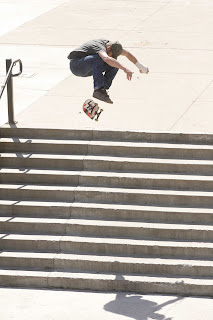 Woke up to keegs kicking my foot, nice! “kurbz lets go everyones in the van already!”. I jumped up off tha floor,threw on some clothes and raced downstairs only to find Dev in his shorts an’ half tha locs still sleepin’… morning classic.

The weather is still nice but everyone is feeling under, sore throats (and Keeg Nosebleeds). Shortly after showers we went for brekky at Tom’s Diner. Bynx? Suposibly DOG the Bounty Hunter was goin’ to be there during the day but we missed him due to the strict business schedule. Joe arrived at the crib an’ had a perfect spot in mind for warm up. Perfect Marble flats surrounded by some epic white pillars… qual? i think so. Unfortunately the sesh was over almost before it started thanks to security (classssic) so we headed downtown. Time to get to serious. perfect 10 stair and 70 above weather is dope. Bums lurking behind the porta-potties and some serious sun tanning, not to mention a quality Kent photo sequence and vid clip. Uncle Brent tested some Brent flips, peep the photo!

The next spot is supposibly simular to the chi but has a perfect rail in the middle so more like a long shallow at mills. Chi + Shallow = Nutty J is hyped and lays down some top notch skating (Keeg as well!). We spent the majority of the afternoon at the rail and left in a rather chipper mood only to find a perfect barrier to skate. We got kicked out quickly, but not before Sean and Devin both landed some baggy bangers. Off to the denver park to finish off the day. Dev wanted to shoot one more photo so some of the boys went to this spot under a bridge. We ended the day with some grub en’ drinks. Currently TROY is on the tube and locs are seshing some card games.
PEACE
kurbz