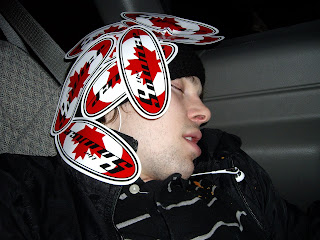 More rain. We managed to sneak in a couple sessions in between showers today. During the rain we found a bunch of spots for tomorrow. Gifford was putting down monster kickflips over a handrail at the Theater of Arts after Keeg firecrackered a five with his eyebrow. There’s tons of back alley bank to wallrides here too. Sean was boosting huge switch front walls on one of ’em when the police pulled up. The cop was raging when he first got outta the car, but was super chill once we told him we were just carving. Devin grabbed a laser scope b.b. gun from Walmart, leaving the rest of us stressed. So we’re gonna scram and sang Kareoke while Dev and Kyle hit up the MickyD’s of poker, texas holdem. Where da wildcards at?