Hailing from the Bay Area of San Francisco, Mike Relm is one of the most innovative DJs in the world. Known for his live performances of audio mash ups mixed with real-time video manipulation, Mike Relm has also performed with the Blue Man Group, remixed tracks for the Aqua Teen Hunger Force movie, and spent the summer touring as an opening act for the Tony Hawk Boom Boom Huck Jam.

If you were at Shambhala in 2005, you will no doubt remember the legendary audio and video mash up that Mike Relm unleashed in the Fractal Forest.

Join The Source this Sunday night, September 28, at Tequila Nightclub (219 17th Ave SW) when Ill Movements and Red Stripe presents Mike Relm Live. This is a show you do not want to miss. 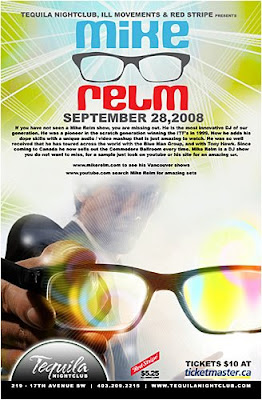